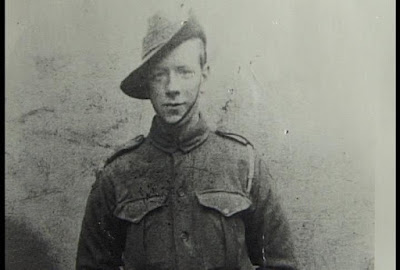 Dear Pa,
I am writing this letter to you on Anzac Day eve. Here you are as a young Anzac and this is my narration in an Anzac sequence in my current documentary ISLAND HOME COUNTRY. I am writing to ask your permission to use the photo in the film along with this narration: Here’s some film I shot of white Australia’s national day of mourning - where we remember the dead - fallen in World War 1 at Gallipoli. The old diggers remind me of our Pa. The World War 1 gunner, dying of mustard gas poisoning in his sick bed. A historian says Australia can mourn these soldiers, but what about the Aboriginal warriors who fought for country when the British invaded? Can they be mourned by the nation as well?
The historian I am referring to is Henry Reynolds. I like the way he opens the map to include the colonial war fought between the British and the First Australians as a war we must commemorate too. And that it is important to move beyond Britain and Germany's war, a war we sent our service men to with such blind obedience to Mother England. Here Reynolds talks about these wars, these events we mourn and make monuments to ( or not) , with Rachel Khon and Ken Inglis on The Spirit of Things, ABC 2001.
Henry Reynolds: If we make the centrepiece of our celebration, our invasion of Turkey, a country we knew nothing about and had no direct experience with, I can’t see why we can’t come to terms with our invasion of Australia.

But more than ever before, Pa, I can hold the memory of you and honour your life and what you suffered in the trenches of World War 1. You were a kind and loving grandfather to us all. I think I felt something of the pain you carried from that war, even when I was a child at Invermay at your and Nan's house.
I am thinking of you,
your loving grand daughter, Jeni.
Posted by jeni thornley at 8:07 PM