Agnès Varda  (1928-2019) was a Paris-based photographer and film director and a key figure in modern film history. She is much revered across the globe for her deconstruction of the documentary form and her boundary-pushing work. In a career spanning 57 years, Agnès Varda, is one of the most original and renowned of the French ‘New Wave’ directors; in fact she is the only female director associated with it – her early films anticipating the work of Godard and Truffaut. 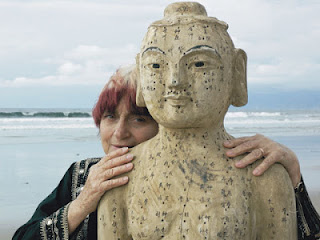 Beaches of Agnes 2008
Antenna Documentary Festival, in collaboration with the Alliance Francaise, the French Embassy and the Art Gallery of New South Wales, presented a tribute to this legendary French filmmaker on October 13th 2012. The films screened in 35mm (what a treat!) Special thanks to AGNSW Curator and projectionist Robert Herbert (1958-2017) ; and thanks to Antenna for inviting me to introduce her films The Gleaners and I and Beaches of Agnes. Here is an extract from my introduction:

In 'The Beaches of Agnes' we are in the mind of an Elder who is ‘essaying’: she weighs up her own life, pays tribute to her lovers, friends, family and colleagues. She time travels back into her own films – and into Demy's films. It is a tribute to cinema – to the nouvelle vaugue, to documentary, to fiction, to imagination, to creativity. There is a great freedom in this film – everything is possible – as in a Melies film. It is magic, the stuff of dreams.

In  'The Gleaners and I' Varda plays with representation – from Millet’s painting – which serves as visual metaphor and foundation text – and she transforms it into her own film text of gleaning. She pushes beyond the surfaces of Millet’s three gleaners and his framing – to blow open the edge of frame and ‘essay’ into her film’s themes; and she gives us herself and her gleaners in fleshy reality. 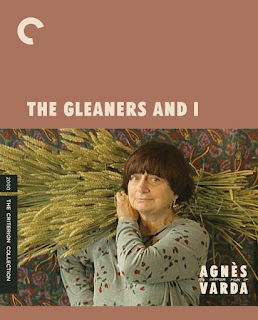 The people actually filmed in 'The Gleaners' – and the way she films with them – is worth thinking about.  How does Varda achieve such a special quality in her interviews? – a feeling of compassion and intimacy – a sense of shared humanity. Varda says this: “The people I have filmed tell us a great deal about our society and ourselves.  I myself learned a lot as I was making this film.  It confirmed my idea that documentaries are a discipline that teach modesty”.

Last year (2021) I was writing about Varda's unique approach to film-making and I came across a thoughtful interview with her by Sheila Heti in The Believer (Issue 66). Sadly, this online magazine's link is no longer active, but here is a quote that expresses Varda's film-making ethic:

If it can be shared, it means there is a common denominator. I think, in emotion, we have that. So even though I’m different or my experiences are different, they cross some middle knot. It’s interesting work for me to tell my life, as a possibility for other people to relate it to themselves—not so much to learn about me… It’s a way of living, sharing things with people who work with me, and they seem to enjoy it.

Back in 1999,  we were blessed to meet up with Agnes Varda at the Creteil International Women's Film Festival in Paris. A group of us Australian women filmmakers screened our films in a program called, Les Antipodes. What a wonderful experience! Varda, one of our great mentors! And yes, we need them.

Posted by jeni thornley at 10:20 PM No comments:

An immersive film poem about transformation and ‘the personal is political’

memory film: a filmmaker's diary is based on my Super8 archives filmed over three decades 1974-2003. The film is an expression of the passage of time, as well as a historic document reflecting personal and political issues of each era. Currently in post-production, the National Film and Sound Archive (NFSA Canberra), acquired and digitized the super8 collection during 2016-2017.  The film is unique as its legacy harks back to the silent movie era; the film has no speaking voices, no interviews and no narration. Its story is told visually and poetically, with images and music and sound.
memory film is currently at rough-cut stage (80mins); editor Lindi Harrison (ASE) worked with me to edit the current 80min rough cut and trailer.  I am currently working on permissions with people (and places) who appear in the rough cut, along with clearing text/quotations permissions. There is a guide music track and we will be licensing quotes from the those musician/composers in this edit. Egyptian Australian oud player, Joseph Tawadros has generously provided the track for the memory film trailer (while we work on raising the post production budget for the film); a number of his tracks are in the rough cut, along with Tunisian oud player Anouar Brahem, Canadian cellist Zoe Keating  and Australian ensemble, Chaika.
The impulse for this film comes from the Japanese death poets. In Japan elders and (Buddhist monks) write poems to express their feelings about the transience of life and the inevitable passing of all things (jisei: “farewell poem to life”). Householders write poems as a gift to their children – a legacy of beauty and insight gathered over years. I like this idea– the contemplation of ageing and approaching death, yet brimming with the lightness and beauty of life.
I borrow moonlight
for this journey of a
million miles
(Saikaku 1730)

A friend gave me Yoel Hoffman's book Japanese Death Poems years ago and I always carry it around - thinking, ruminating, writing - gradually realising that I could make a film in the spirit of this poetic tradition. Then I discovered that video artist Bill Viola has done just this! So then, everything is perhaps borrowed! The other filmmaker I return to in the vein of death poetry film-making (and the use of the home movie archive) is Derek Jarman and his innovative film Blue that he made when he was in hospital dying (1994). Yet, ultimately as Thacker in his essay Black Illumination: Zen and the poetry of death writes, quoting death poet Toko:
Death poems
are mere delusion
death is death
(Toko 1795)
What I know about the content of the film – it is composed only of my Super8, filmed between 1974-2003. A layer of the film reflects films I have made and the politics of each era: Maidens (1978), For Love or Money (McMurchy, Nash, Oliver & Thornley 1983), To the Other Shore (1996) and Island Home Country (2008).  Why the title: “memory film”? Film, unlike creative forms like painting, sculpture or writing, is ephemeral. Like theatre and music it, too, is passing by. The movement of film through the gate of the camera, through the projector, (both film and digital), parallels the movement of life – its transience, its flow; watching film we experience time passing, and like the mercury of old we cannot really hold it still. Also some of the Super8 is degraded with time; the colour might have faded, mould has eaten away at the celluloid; the body of the film is ageing, as is mine. I will not hide it. These fragments of life on my 137 rolls and 9 composite reels of Super8 trigger my memory as it fades with age.
The production context for the film is the School of Communication, Faculty of Arts and Social Sciences (FASS) UTS, where I am a Visiting Scholar. Marcus Ekermann, FASS MediaLab, is technical consultant. I edited a first assembly (3.5hrs) and editor Lindi Harrison (ASE) worked with me to edit the current 80min rough cut and trailer.
All this happened. Yes, I was in the women’s liberation movement; I had a share in women’s land; I marched against the war in Vietnam; I filmed Super8 on the set of Journey Among Women, on Anzac Day, Australia Day and the Aboriginal Awakening ceremonies; I loved women and men; I have a husband, children and grand children and I had a therapist; I bow to my meditation teachers. And yes I made these films. Here is the evidence, it was real, I filmed it. memory = film. And so, I share this “farewell film poem to life” (jisei), tenderly with you.