I am back from the International Anthropological Film Festival in Ho Chi Minh City, Vietnam – organised by VICAS: Vietnam Institute of Culture and Arts Studies). Screening in four venues across Ho Chi Minh City (two universities) this was an amazing event! 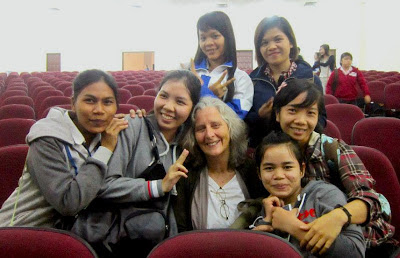 It was a really great cross-cultural experience and I learnt so much about Vietnam (and visual ethnography).  It would be great to see some of the films in this program in Australia. Here is the Festival's trailer which gives something of a feel for the festival films (although censorship in Vietnam is a real issue –  some local and international films were banned and/or cut–sometimes at the very last moment- so the program shifted here and there).

The discussions (formal and informal) were so thorough. Some-times 2 hours on one film! Incredible detail - so that more social, political, philosophical and historical issues were discussed, than film-making practice. You know, I liked this Festival so much more than the 'standard' film festival where the market place dominates - or when there are so many films (back to back) that there is no time for in-depth discussion - or discussion feel hurried.  Here at the Anthrop Film Festival the discussions were an intrinsic part of the screening – and were in depth, insightful and penetrating. At Ho Chi Minh City's University of Culture I was taken by the intense engagement of the students with the ideas presented in each film. This was no ordinary film festival, but something unique. I asked a colleague if he thought this quality was the "anthropological"  nature of the event or some quality in Vietnamese culture and-or their education system? We reckoned it was probably both! 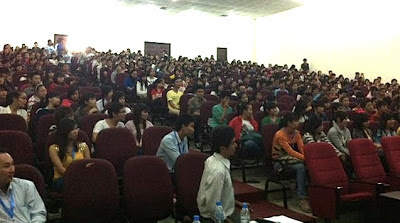 Actually, I have never really located myself within this field of visual ethnography - perhaps because anthropological films in Australia have mostly been made from within the vexed site of colonising. I have preferred to make films  as a 'documentary maker'. Also my own film-making began as part of a political process - making feminist films for social change. But this Festival has stimulated me to review various positions I have held over the years.  All orthodoxies need to be challenged! And anthropology, too is going through its own transformations - and a genuine 'participatory',  ethical and de-colonising film-making is very much part of current practice: "The remarkable novelty comes when a Maori becomes an anthropologist and she practices anthropology as a Maori rather than studying the Maori as an anthropologist". Walter Mingolo, ('Decolonizing Western Epistemology, Building Decolonial Epistemologies') . Mingolo's essay refers to Maori scholar Linda Tuhiwai Smith and her great book: "Decolonizing Methodologies: Research and Indigenous Peoples" (1998) whch has just been released in its 2nd edition (2012). The book "has been substantially revised, with new case-studies and examples and important additions on new indigenous literature, the role of research in indigenous struggles for social justice, which brings this essential volume urgently up-to-date".
I will be writing an article about the AnthroFestival for Realtime (Feb 2013).

Posted by jeni thornley at 1:03 PM