The ethnography of compassion

Recently I went to Vietnam to  the inaugural International Anthropological Film Festival in Ho Chi Minh City. Realtime (Issue 13, 2013) has just published my review of that Festival: The Ethnography of Compassion

The drawing is from We Want (U) to Know (2011) by Ella Pugliese (Italy) and Nou Va (Cambodia). This participatory documentary was created with survivors of the Khmer Rouge period. The intended audience is Cambodian, and the film has been used over the last couple of years by NGO's and outreach programs to teach villagers about the Khmer Rouge regime and about the country's ongoing Khmer Rouge tribunal.

Produced around the time of the Tribunal, amidst the painful process of remembering, the film reveals its own methods of storytelling and re-enactment, along with the potency of the children filming their elders. These participatory methods become part of a restorative justice process. The film develops as a work of mourning—a catalyst to transformative emotional change. Drawing, painting and working through trauma with re-enactments were part of the filmmakers process with the villagers.

The energy of cultural exchange and shared consciousness is a significant quality that visual ethnography offers the documentary tradition. It is also a mode of filmmaking with a strong foundation in Vietnam and in its tertiary education. Vietnamese visual ethnographers are making films from perspectives within their own culture, not as observers representing ‘the other’ —perhaps as a consequence of having achieved liberation from French and American colonisation. Also, it is not surprising that many of the films are working through complex issues around tradition and modernity given the largely agrarian population and its multi-ethnicity—with over 50 distinct groups, each with its own language and cultural heritage. I appreciated many of the films and the engaged discussions that took place around them.

Filmmaker Tu Thi Thu Hang participated in many of the discussions and she often shared deeply about Vietnamese history and events that had affected her family in the immediate post war period. Tu Thi Thu Hang  structures her recent film, The Old Man Who Sells Bananas (2012), so that the audience starts out with ‘her’ mis-perception of the Old Man. 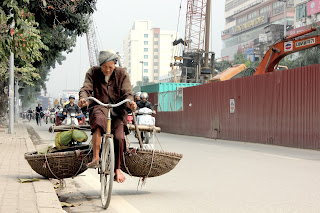 We see him as a victim too—he seems poor, elderly and abandoned. Skillfully filming with him over one and a half years Hang draws us closer into this man’s life, step by step—from lone individual to family man, to respected wise elder of the village with his Confucian ethics and responsibilities. In discussion the filmmaker describes her process: “Now I have a completely different way of looking at him.” (And so do we). “He is the ‘last man’ who lived in a previous epoch. In his 84 years he has lived through the French and American occupation, and liberation. He has passed through the main eras of Vietnamese history. He has applied traditional wisdom to develop what is an ethical way to live.”

Michael Renov, documentary film scholar, refers to the '5th tendency' of documentary as 'the ethical', in "What’s at stake for the documentary enterprise?

I think that the ethical in itself. . . has a sort of functioning dimension, and it is also glued to this notion of a common desire or impulse: an ethical impulse, that one can see as an underlying and consistent theme that cross the history of documentary. How do I. . . what is my relationship with this other? What do I mean to that person, what does that person mean to me, what’s at stake in representing others?

So I think Renov's finely tuned insight that 'the ethical' is fundamental to documentary is so relevant - not only to today- but to the whole history of documentary. The 'ethical'  is the frame by which we both make and study documentary.
Posted by jeni thornley at 1:13 PM

Email ThisBlogThis!Share to TwitterShare to FacebookShare to Pinterest
Labels: coming into country the proper way, documentary ethics, the politics of mourning