Here is our, Pa Tom,  mum's dad. He was a gunner in World War 1. Here he is, so young. I am remembering him this Anzac Day- and all he went through. His asthma was really bad when he came back from the Front. Some said it was the mustard gas. He died of an asthma attack early one morning in Invermay, Launceston Tasmania, in 1956. When we were little kids he used to whisper , "run up to the shops and buy a packet of fags for your poor old Pa, but don't tell Nan". He would press the coins into my hand, and off we would trot; how  strange I felt - on  this secret mission.


I never march on Anzac Day. I feel so strange about it all. I just can't relate to nationalism, patriotism or war. The only time I ever went to an Anzac Day March was when we women marched under a banner: "In memory of all women of all countries, raped in all wars."   I think it was around 1981. I filmed it on super 8 – the women's faces – such gravitas and dignity. They-we marched straight into the waiting police paddy wagons;  the organisors wouldn't give permission to the women to march under that banner. The great unspoken of war. 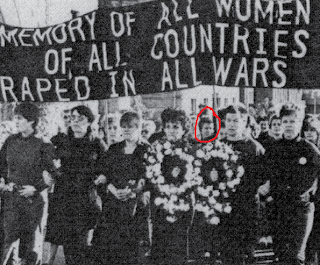 Ps This photo is not the Sydney 1981 Anzac Day March....and I have no idea who the red circled person is!
Posted by jeni thornley at 9:26 PM

Email ThisBlogThis!Share to TwitterShare to FacebookShare to Pinterest
Labels: living beyond the colonial construct., the politics of mourning