'From archive into the future'

Harris also writes about We Aim to Please, My Survival as an Aboriginal and Two Laws - as well as taking on the whole dilemma of archiving and distributing classic films, what she calls the Lost Found Paradox. She also writes about the demise of film making collectives and the slow moving pace of real gender equality both in our so called film industry and in society generally. A really insightful essay! A tribute to our era of filmmaking and also to this recent Sydney Film Festival curatorship by Susan Charlton. Congrats all!


Digging around in this past (and also our present) collective memories are faded for exact dates and the narrative around these early filmmaking days. After all I was 21 when, with Martha Ansara and the Sydney Women's Film Group, we started workshopping Film For Discussion (1974), and now 44 years has passed!

In a previous blog post "The archive of the self and deconstructing the national archive"  (2014) I wrote that this mirror shot was emotionally too much for me to deal with at the time, yet it became foundational in my subsequent turn to a kind of poetic, found-footage, autobiographical film-making style in Maidens, and subsequent films, developing an ‘archive of the self’. This is what I mean by duration – how long it takes to gain insight into one’s intention with a piece of archival footage – as an internal process of the psyche.

Back to gathering the threads of what happened back then....what follows for now are a few rough notes on early women's filmmaking groups back in the 1970s (and thanks Carole Kostanich for your recent email).

We all see and experience this early history from our own perspective and involvement- so the dates and details will naturally differ.  I remember being part of the  SWFG formation,  The Sydney Filmmaker's Co-op, Women Vision, The Women's Film Workshop 74; the lobby for 50% female intake into AFTRS in IWYear 1975, the International Women's Film Festival 1975, the Women's Film Fund (I became Manager in 1984-85); and later the Women's Film Units, FFW formation 1978; Film Action formation, and all the inter-related women's groups (like Women and Labour etc) and the many political organisations all connected. 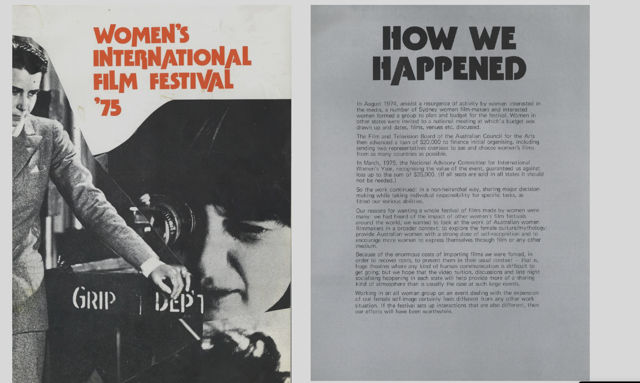 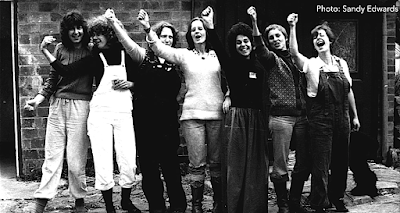 "In 1979 the Minto Discussion Weekend was held where women filmmakers and theorists came together to debate film, politics and theory.  It was an initiative of the Feminist Film Workers who formed in 1978 as a splinter group of the Sydney Women’s Film Group to focus specifically on education, distribution and exhibition of feminist films."

"In 1979 the Catalogue of Independent Women's Films was published by the SWFG (ed B.Allysen). Early in 1979, a full-time position in distribution at the Coop was secured for a women's filmworker, after the FFW were able to show that the rental of women's films accounted for 50% of the total rental income at the Co-op. In the same year, the FFW secured a grant of $20,000 from the Women's Film Fund to operate an office away from the Co-op and pay a full-time worker who would who would engage in the promotion of the feminist films in its collection, to increase print sales...The Co-op continued to handle the rental of FFW's films, however" (Stott in Blonski (ed) 1987: 120).

With the Women's Film Fund Grant, and with Sarah Gibson as full time distribution worker, some of the events and activities of FFW included: 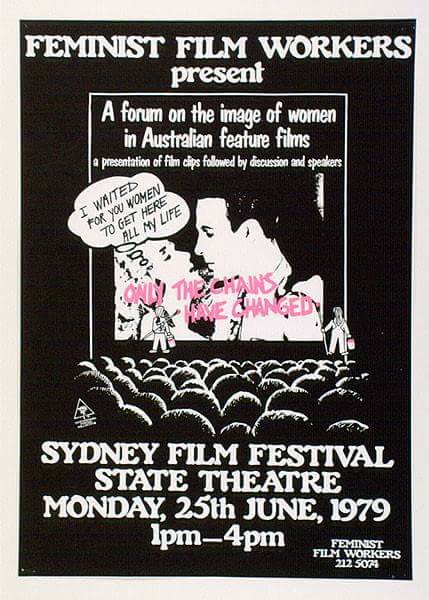 A note: the 2017 Melbourne Women in Film Festival (MIFF http://www.mwff.org.au) tributed our 1975 International Women's Film Festival that toured all Australian capital cities. There were collectives in all states. I was involved as one of several National Co-odinators - the list of International films and Australian films we curated for the Festival is impressive. This Festival was a significant introduction to the history of international women's filmmaking which we had been so little exposed to in Australia.  For many of the international films we negotiated distribution contracts with Sydney Filmmakers Co-op (Sian Mitchell MIFF Co-ordinator) and I  are currently trying to locate the whereabouts of these prints).

The MIFF 2017 program included a program which revisited the aims of our original Festival (this meant a lot to me, as I spent more than a year working on this Festival).  Also MIFF screened my first film (with Dasha Ross) Still Life 1974 and linked the festival to peephole online film journal, which in March 2017 published several essays on the 1975 festival and women's filmmaking.

"This edition of Peephole Journal looks to commemorate not only the launch of the Melbourne Women in Film Festival, but to give some attention to the diversity of women's filmmaking, the multitude of women's perspectives evident in its storytelling, and the place of women in criticism.

I wrote this  essay, Looking at Women and Festival Director Sian Mitchell writes about the 75 Festival and MIFF  in her editorial;and Loma Bridge writes about Anne Severson's Near the Big Chakra (1975) and Sharon Hennessey's What I Want (1971):  Statu[t]es of Liberties...