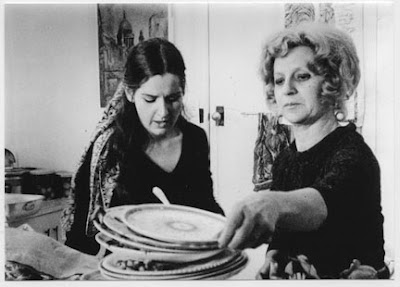 This is a still of me and screen mother Jovana Janson from Film for Discussion a film Sydney Women's Flm Group made in the early 1970s. I play a young woman in a crisis about work, life and identity- triggered by her encounter with feminism. The film was nominated for Best Documentary, Greater Union Awards, Sydney Film Festival 1974. SWFG was one of the first Australian groups to establish itself in the name of 'Women’s Liberation'. Film For Discussion is a docu-drama shot in 1970 and completed until 1973. The film sought to encapsulate in an experimental form issues that were under discussion within the Women’s Liberation Movement and so contribute to action for change. The link is to Ballad Films the website of Martha Ansara, my friend and colleague. Martha was a key person in my becoming a filmmaker, alongside my Dad who was a film exhibitor. It was Martha who introduced me to the actual possibility of women making their own films. It doesn't seem that radical in 2017, but in 1969 it was! Go on this site and order a copy of the film and also see other films to purchase by Ansara. Film For Discussion screened this year (2017) in Feminism and Film: Sydney Women Filmmakers, 1970s-1980s at Sydney International Film Festival.
Posted by jeni thornley at 12:56 AM